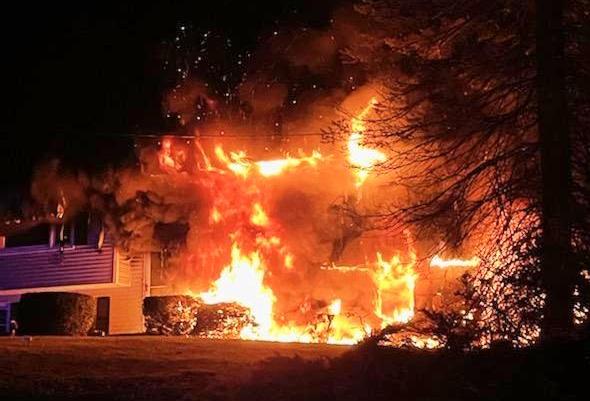 Late Sunday night just before midnight January 17 Mount Olive Fire Departments (Budd Lake & Flanders) were dispatched to Bridle Lane in the Budd Lake section of town for a report of a house fire. Car 50 and 52 arrived and reported a working fire and transmitted a second alarm followed by car 51 and Engine 53 who went to work with a line to the garage and then across the front and then into the second-floor bedrooms. Ladder 58 arrived and laid a supply line to 53 and the went to the roof for a vent. Mutual Aid arrived and provided a rapid intervention crew and additional man power. The fire was knocked down within a half hour but crews remained on scene for 3 hours hitting hot spots and overhaul. The fire is under investigation by the Mount Olive Police and Fire Marshall’s office. There were no injuries at the scene with the help of neighbor’s all occupants and pets were out. Mutual Aid at the scene and coverage were Netcong, Chester, Hackettstown, Byram, Schooley’s Mt., Roxbury and Randolph Fire Companies. Long Valley and Roxbury EMS also provide coverage.